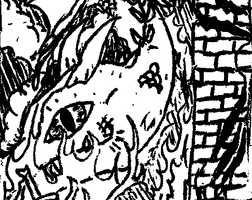 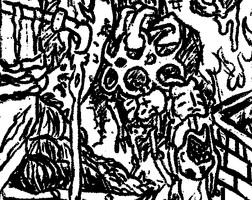 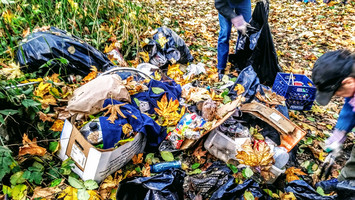 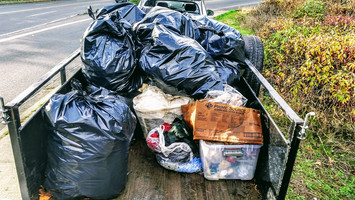 Vessel of The Garbage God came out of nowhere for me. It started with a tweet from  Jeeyon Shim  a little over a week ago. She was talking about working with Jason Morningstar on a collection of trash games that were going to be released soon through his patreon. Jokingly I asked if one of the games would involve using the amount of trash you picked up to decide how much damage you did to a dragon. He replied and said no, but I should write that game.  https://twitter.com/jeeyonshim/status/1238162925132619776?s=20

I immediately began writing the game on my phone. I had just gotten back from Costa Rica, where I had managed to brick my laptop by updating the bios (big mistake). So I was wrtiting on my phone, most of it written in the bathroom (I spend way too much time in the bathroom on my phone). Quickly the idea transformed as I was writing. Killing a dragon wasn't actually nearly as interesting to me as being the dragon, being some kind of elder trash god. I liked the idea of telling the player that you were a god taking over your own body, and talking to yourself through your own mouth. Fun, right?

It only took me about 2 hours to write, I did some quick editing and then uploaded the game to google drive. The game is largely inspired by Jeeyon Shim's games, a sort of ritual you are walked through step by step. To me these games are a form of prose as much as they are games, on first read they walk you through the thought experiment of "what if I actually played this game?" Often they present the point of view of an interesting character, with physical actions designed to put you in the mindset of that character. Playing them is usually introspective and meditative, the game text itself functioning almost like a guided meditation.

The other big part of the idea of the game comes from my experiences working with Just Housing Olympia. They organize weekly trash pickup from local homeless camps, one of the main ways I've gotten involved. It's a form of community support that recognizes that the problems that affect the houseless affect the whole community, truly no one wants trash accumulating where they live. Yet for some reason city garbage services neglect the houseless. With no garbage pickup anyone would quickly find themselves struggling with figuring out what to do with all their refuse.

It's common in America for people to blame the houseless for their situation and not look at the systemic problems that lead there. I believe housing first is the best approach to solving the housing crisis. Housing first means putting the houseless into housing with as few barriers as possible, using a whatever it takes mindset to support them in becoming self sufficient. Data from places where this approach has been tried show it to be the most effective way to reduce houselessness, and really it's just common sense. You reduce houselessness by giving people housing.

Many people seem to feel a certain resentment regarding the idea that someone else might get for free what they had to work for. But this is a basic failure of empathy. The truth is we do not all start from the same place in this country, we all have different support and resources available to us. The majority of people become houseless because they are fleeing abuse, because of mental health problems, because of costly accidents and times of crises, because of changes in the economy and fluctuations in the housing and job markets completely outside individuals control.

Housing and shelter are basic necessities for human existence, yet they are commoditized for profit and used as an investment. Mortgages are bought and sold in bulk by huge corporations, and the last economic crash was engineered by wealthy loan agents and management companies looking to turn a profit by gambling with the livelihood and shelter of millions of people. To me the entire housing industry is incredibly unethical. Housing is a human right, essential to life, liberty, and the pursuit of happiness, it should not be exploited to turn a profit. The government has shown itself capable of materializing vast amounts of wealth out of nowhere to bailout America's wealthy, but when it comes to the poor people always ask where the money will come from.

As a society it should be the first priority to provide for the basic needs of the people living within it, and to reduce harm wherever possible. Yet the situation only gets worse when we look out how the homeless population is treated. Their very existence is criminalized. Most cities have ordinances that make it illegal to camp on city property, make it illegal to sit or rest on sidewalks or to sleep in parks. It's even illegal to camp on most state property, to find a legal place to camp you often must venture far out into the wilderness. I made a video about the effect of these ordinances on the houseless here, that was made with the feedback of members of the local houseless community:

These ordinances along with others for loitering, public drunkenness, exposure, are all collectively used to target people who have literally been forced outdoors through an eviction process. These people are forced to live with no privacy which is already extremely stressful, but on top of that their very biological processes necessary for survival are made illegal. Cities could easily provide public restrooms and housing to alleviate these problems and provide a much needed service, but instead they would rather fill jail cells. Houseless people suffer from exposure and fall into illegal drug use as a coping mechanism, compounding health issues and making them prone to illness and injury they can't afford treatment for. And all of this policing, jailing, and hospitalization ends up being at far greater cost to taxpayers than housing, restrooms, and garbage pickup would be.

As you can imagine, people without houses have to create their own shelter somewhere, which is why houseless camps form. These camps are frequently sweeped, usually using some public safety or garbage ordinance as justification. When a sweep occurs, houseless people are given very little notice if any, bulldozers, policemen, and dumpsters are brought in, using force to eject residents if they resist. Tents are slashed, more permanent shelters and structures are demolished, personal property is confiscated and trashed. Most people in this situation lose their homes (this is why I say houseless, not homeless), and are only able to keep what possessions they can carry.  They lose all sorts of useful tools, and important objects of sentimental value, like their only photo of their grandparents, or a letter from an estranged child. These losses and the feeling of having to start over can only deepen despair.

It's with this enormous nationwide tragedy of justice and mismanagement of resources in mind that Just Housing Olympia began supporting houseless camps with trash pickup. For one this increases the quality of life for houseless people because they no longer have to live around the smell of rotting food and molding fabric. Garbage also attracts rats and other scavenging animals which tear open bags and tents spoiling food supplies and exposing people or belongings to the elements, leaving the houseless in a constant war with wildlife. Garbage piles are also one of the main things neighbors will file complaints about and harass the houseless over, which often leads to an inevitable sweep. Ultimately we are doing the job the city is failing to do.

So with this game I hoped to spread that idea in a whimsical way. The program has been very successful, and has lead to many houseless communities in our area organizing internally to clean up their camps and leave trash for us at curbside pickup locations. It is also useful when negotiating with city government for greater support to the houseless community and to stop sweeping camps. We can point out the spending and unrest we are sparing the city from by providing this community service. Truth be told the city does not always listen, and tends to respect the complaints of home and business owners far more than their houseless constituents.

So, social justice rant out of the way, back to the creation of the game. Once I finished writing it I wasn't sure what I would do with it, but I thought it might make sense to offer it to Morningstar to include in the compilation he was making with Jeeyon. I posted the game on twitter and both responded enthusiastically, so I asked if they wanted to include it.

Mind you, I was a bit nervous to ask, Jason Morningstar is one of my favorite game designers and a huge role model and inspiration for all of my games. Fiasco was one of the first story games I played and I still consider it to be the basic template I start from in my mind when making a game. Jeeyon is likewise an award winning game designer and an amazing and admirable person. So the opportunity to collaborate with either of them is something of a dream come true.

I couldn't be happier when Jason accepted the offer, and went so far as to offer to lay it out as well. Right away I started talking to him about my ideas for layout, which I amounted to "I dunno, a picture of a dragon?" He couldn't commit to making art for the game so I reached out to my little brother (@jerskann on twitter) who made some awesome ink art for inktober. He agreed to help and made the cover art you can see on the game. I loved it and thought it was very metal, which gave me the idea to go for something of a doom metal zine aesthetic. I ran the idea of making a border for the game to my brother and he was down for that too.

Morningstar had by that point already laid out the game, and was already busy with putting together six other games for the compilation between him and Jeeyon,  so going back and adding the border and redoing the layout was too much to ask at that point. He sent me the files and I did it myself, leading to the version you can get here. I'm in love with the art I think it adds a lot to the feel and appeal of the game.

I also reached out to Just Housing Olympia,  about using the game to promote the organization and they were also enthusiastic about the idea. Robert Bruce, my long time friend and collaborator, agreed to help me out with editing. He's also more involved with Just Housing than I am and coordinates trash pickup, so he was able to give me some really useful advice on how to pick up trash safely and be respectful of camp residents, which became the sections On Safety and On Respect.

Anyways, that was how and why the game got made, please consider following @jerskann on twitter and supporting Just Housing Olympia on their website justhousingolympia.org. I'd be perfectly happy if you donated there instead of paying for the game here. And if you do play it, please, let me know how it goes!

Get Vessel of The Garbage God

Vessel of The Garbage God

An ancient god of garbage has taken over your body, using it to gather trash from the camps of society's most vulnerable